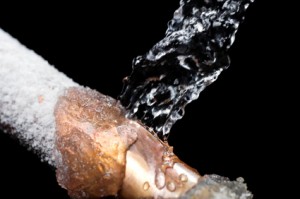 Have you ever had a plumbing emergency in your home? We mean one where water was pouring all over the floor and you had to run around keeping everything as dry as possible while phoning a plumber? If you have, then you’re going to appreciate what we have to say in this post. If you haven’t, then you should know that it will probably happen at some point so you should pay attention anyway. Let’s take a look at why it’s a good idea to install an automatic shutoff valve in your home.

The single biggest threat that most plumbing issues pose is that of water damage. Plumbing emergencies are usually classified as such because they can cause significantly more water damage in a short amount of time, and so need to be dealt with as quickly as possible. That presents a couple of challenges for those who want to protect their homes against these kinds of plumbing issues.

Normally, the way to prevent a plumbing issue from causing too much trouble before it can be repaired is by turning the manual shutoff valve. All homes have this valve in their water line, in case repairs or other work needs to be done on the plumbing system. Closing the valve will shut off the flow of all water into the plumbing system, which means no more water will be leaking out into the home and causing damage. The problem with relying on this valve. First, the location isn’t standardized. If you don’t know where it is, you don’t want to go running around looking for it in the middle of an emergency. The second problem is that you have to be there for the valve to protect the home. If a pipe ruptures while you’re asleep or out of the house, then there’s nothing you can do to prevent it from causing havoc. This is why it might be a good idea to install an automatic shutoff valve.

An automatic shutoff valve is a water valve that monitors the water flowing through the plumbing system at all times. If and when a large enough leak springs in the plumbing system, the valve will detect it and immediately shut off all water. That means that whether you notice the issue or not, whether you’re there or not, the home will be as protected as possible against water damage until the issue can be fixed.

An automatic shutoff valve may seem like an afterthought, something to install on the off-chance that it’s needed. Trust us when we say, though, that if the valve activates even a single time it will likely pay for itself with the amount of money it saves you in water remediation costs. If you want to make sure you never have to deal with an entire floor of your home flooding due to a plumbing issue, this is the way to do it.

Performance Plumbing installs and services automatic shutoff valves in St. Louis, MO. Contact us for an appointment with one of our plumbers.

Service Throughout St. Louis and St. Charles Counties, Since 1991

Do we serve your area?

Call us immediately for urgent problems.

Where to Find Us